“We can’t let history repeat itself”

You are getting two reviews for the price of one this week, Beasties! I was away, traveling with my family but I’m all caught up and very excited about the show gearing up for the season finale airing on September 10. So much was revealed these past two weeks, so lets dive right in!

In Unbreakable, Liam (Jason Gedrick) seems to have one goal; to separate Vincent and Cat. We all know that no one can ever truly break their bond, but Liam is pretty smart in how he goes about keeping our lovebirds apart. Using Cat and a still in hiding JT as bait, Liam gives Vincent an impossible choice; help him or risk the ones he loves. Liam tells Vincent that his love for Cat keeps him weak and that his true beast nature can and should not be denied. This is of course the eternal struggle and it clearly weighs heavily on both Vincent and Cat. If Vincent cooperates with Liam he may be able to gain his trust and learn of his endgame, plus he will keep JT and Cat safe, at least temporarily, but what if he crosses that line between human and monster? Liam tells Vincent that they are very much alike, “A kill is a kill, just like a beast is a beast” and when he explains that the threat of exposure is as harmful to Vincent as it is to him and that he wants Vincent to help him break into the DHS labs to find and destroy the last super human blood samples, including Liam’s and Vincent’s, there is not much left to do but give in to his demands. 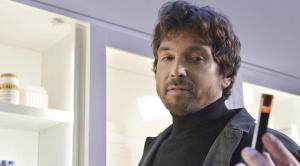 Throughout the whole exercise, Liam provokes Vincent into using his beast powers and tapping into his anger. He seems to be trying to win Vincent over to the primal beast side, or is he really just trying to make the point that it is useless to resist? Love won’t last forever, he warns, and when it ends, you will be left with nothing but whom you really are. A prophecy perhaps? Or a memory of his own personal experience?

Meanwhile, JT and Tess are trying to locate the “beast kryptonite” gemstone. The plan is to ambush Liam on his way out of the lab and arrest him while he is weakened. He would have to be caught in the act, since he somehow managed to get all his previous charges dismissed with the help of a wealthy and charitable family, the Ellingsworths. Cat sneaks into a charitable event to try and convince Helen Ellingsworth (Wendy Crewson) that Liam is a con man and not to be trusted, to no avail. Not only does Mrs. Ellingsworth believe that Liam is her benefactor, she also reveals that he is her brother.

This is a shocking and highly unlikely reveal and Cat will have none of it. She is convinced it is yet another of Liam’s scams and she has JT re-check the DNA test that proved a familial connection. To everyone’s surprise, including my own, JT discovers that Helen and Liam are indeed related. However, they are not siblings; rather, Liam is Helen’s 200 year old ancestor! Who knew that beasts had such longevity?! Heather, proving once and for all that she has earned her place in the Scooby gang, pulls up research she did on the Rebecca and Alistair story and finds a newspaper clipping from 1854 that clearly shows a picture of Liam. Not only is he connected to Vincent and Cat’s present story, he is part of their past. Liam was Rebecca’s fiancée before Alistair. HE was the beast who ended up betraying and murdering them both, and it sure seems like history is going to repeat itself.

Liam does end up giving away some of his endgame when he exclaims that he is looking for a way to end his own suffering. Vincent senses that his pain is primal and raw and that his goal is revenge. They fight in the lab and the blood samples get destroyed, but Liam and Vincent get away before the swat team gets there. For a moment Liam thinks that Vincent has joined him on the dark side, but Vincent has passed his test, even without Cat by his side. Instead of taking Liam’s offered hand, he throws the superhuman beast off the roof.

While Heather does more research, Cat and Vincent take comfort in the fact that they have grown stronger and closer through this ordeal. If they are going to defeat Liam, it will be together.

JT is learning a similar lesson, meanwhile. He tried to keep his declining health a secret partly because he fears that being weak will chase Tess away. Of course Tess is mad and devastated. She doesn’t want to lose JT yet again and she is furious that he would think that she only started caring about him once he developed super powers. From Heather’s loyalty to her sister and her dogged determination to learn more, to Tess and JT’s affectionate bickering and Cat and Vincent’s undying love, one things is clear. They are all better and stronger together. 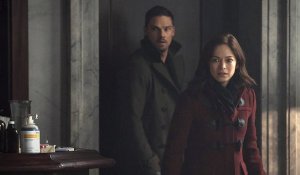 In Sins of the Father we see some of the fallout of everything that was revealed in the previous episode. Vincent and Cat’s love is destined and fierce, but what will become of their love when Vincent stays youthful and lives for hundreds of years while Cat grows old and dies? I don’t doubt that Vincent will continue to love her, but what will become of him when she’s no longer by his side? Will Liam be right that once the love is gone all that will be left is who he is, a beast?

Rebecca made the mistake of trying to protect Alistair too much by keeping tight control of him and it cost them both their lives. Cat is certainly fond of being in control at all times, but even she recognizes that she needs to let go, lest history repeats itself. She is clearly worried and dreams of her own death and obsesses enough to draw up a will. Liam is a real threat and they need to find a way to defeat him, while also keeping him alive, since getting a sample of his blood may be the only hope for a cure for JT. The rather desperate plan Vincent and Cat come up with is to re-create the serum Agent Reynolds (Ted Whittall), Cat’s father, used to control Vincent by erasing his memory and turning him into a mindless assassin. A risky plan to be sure, even Reynolds thinks so. He had weeks or months to work on Vincent, slowly chipping away at his mind until nothing but a focused killer remained. Perhaps not what the team needs Liam to become!

Liam meanwhile, has found effective ways to keep our heroes distracted. Internal Affairs is opening an investigation into Cat’s interference with the Ellingsworth family, and Helen Ellingsworth shows up in Vincent’s ER with serious symptoms, asking specifically for Dr. Keller to treat her, at her brother’s recommendation. It’s all a set up of course and when Liam visits the hospital to deliver his coup de grace, he does it in such a way that the suspicion for the wealthy do-gooder’s death lands on Vincent. I was a little surprised at how unprotected Vincent left Helen Ellingsworth, especially considering all the proof of poisoning, but that’s a minor quibble. More important is the reveal that her death is only part of Liam’s plan. He uses his influence to hastily organize a family only funeral, where the entire Ellingsworth clan will be sitting ducks for Liam’s revenge plan. It turns out that Liam was kicked out of the family 200 years ago. Helen’s grandfather could not abide by having a monster as a relative and he was ostracized and placed in a orphanage as a young child; something he has apparently not gotten over in two centuries. 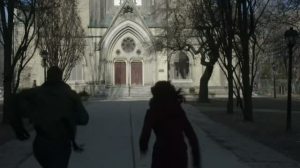 Vincent and Cat manage to capture Liam with the help of the gem and a lot of tranquilizer darts and they even break Reynolds out of prison to make him help in creating the serum, but it backfires in a spectacular way when it does exactly what it did to Vincent. In the end, even though the Ellingsworh clan is saved by Vincent and Cat, Cat’s father is dead, JT and Heather narrowly escape and Liam is now a single minded, focused killer who thinks Vincent and Cat are Alistair and Rebecca, the two people he holds most responsible for his misery.

As Cat and Vincent mourn and toast her father for at least being able to find some redemption in his death, Liam ominously spies on the lovers from a dark doorway.

I watched and re-watched these two episodes at least twice in a row and what ride! The action and drama were non-stop and the reveals kept coming at a furious pace. I think this has been perhaps the most well structured season yet of Beauty and the Beast. The main myth is building to a satisfying crescendo, anchored in logical and earned character development. Casting of secondary characters has been stellar and performances overall are carrying the added layers really well. If I have any complaints it is that sometimes the messages about “letting go” and “ending the unhealthy codependency” are hammered home over and over in a not terribly subtle way. We get it from the choices that Vincent and Cat are making just fine and it’s unnecessary and tedious to hear it spoken in the dialogue over and over. Viewers are smart enough; we get it.

Some specific moments stand out for me; particularly the well-deserved integration of Nicole Gale Anderson‘s Heather into the main story-lines. Also, the natural development of the JTnT romance has made this pairing one of the more realistic portrayals of a relationship, be it under supernatural circumstances. I really enjoyed Tess’ attempt to check some boxes on JT’s bucket list, just in case. Death has always been a presence on this show but especially throughout Sins of the Fathers, it was an actual theme. It is no longer a vague slightly romanticized background threat, but now an actual consideration and integral part of the love story. All the characters are facing their mortality, or lack thereof, and it’s bound to change the course of their lives and relationships.

I, for one, can hardly wait to see where it will all end on September 10, and what it will set up for season 4, being filmed as I write this.

Will Liam be defeated? Now that it seems that his blood is healing JT, will his powers resurface? Will Vincent and Catherine finally get their happy ending? I suspect that we will have to wait a little longer for that one. What do you think Beasties? How will it all end? Give us your thoughts in a comment below.

Copyright © 2021 Create a free website or blog at WordPress.com.