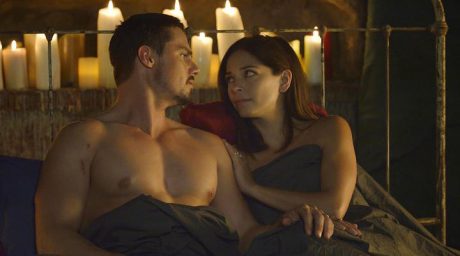 “I don’t do so well without you”

The quote I chose for this week sums up Beauty and the Beast pretty well. Predictably our team, and especially Vincent and Cat, always do worse  when they don’t stick together. It’s been an overarching theme for the life of the show, but somehow our heroes never seem to learn it. This time, their separation is even essential to their success and it is starting to take its toll.

As Love is a Battlefield starts, we see both Vincent and Cat struggling to gain trust in their respective situations. Vincent is fighting his way up the ladder, quite literally punching and kicking his way into the Graydal operation and Cat is trying to convince her new boss, DHA Special agent Dylan (Anastasia Barzee), that she is really on their side, ready to bring Vincent in. On both sides there is suspicion and it is not helping that the circumstances are keeping Vincent and Catherine from communicating with each other. Not even JT has been able to track down Vincent and it is making him nervous. When Vincent finally gets in touch to give up a Graydal operator so he himself can be sent on missions instead, the whole plan starts to backfire.

That’s the thing that really struck me, in this episode. The more Vincent goes dark side to infiltrate deeper into Graydal’s trusted inner circle, the harder it will be to prove his innocence. Same goes for Cat, the more she wants to be trusted by her superiors, the more she needs to convince them that Vincent is irredeemable, and worthy of giving up on. All the while though, the goal is to prove Vincent innocent, which is getting harder and harder to do and is in fact jeopardized by the very plan they are executing. It’s a bit of a catch 22 and it’s an awfully deep hole our friends are digging for themselves.

Vincent manages to get a Graydal assignment, but DHS is close on his heels. They have found out he works for the shadowy contractor and to make it worse, they find out about Vincent’s whereabouts and his new mission from the very Graydal operative that Vincent handed them on a silver platter. As Cat rushes to stay ahead of her bosses, she is able to both warn Vincent and save deputy Dylan from being killed via stiletto heel, which finally gets her into the good graces of her new superior. Cat is appointed lead investigator in the manhunt for Vincent. Surely a somewhat ironic accomplishment.

Meanwhile, Vincent worms his way into the Graydal inner circle by proving his loyalty once and for all. Earlier in the episode he exclaimed in frustration, “What is it going to take! Killing a guy?” and he makes good on his own eerie foreshadowing. Luckily Vincent is also a skilled battlefield and ER doctor, so he is able to bring his victim back to life, but he certainly crossed another line. Interesting how Cat managed to go deep undercover with DHS by saving a life, and how Vincent had to kill a guy to do the same. It is a purposeful and effective contrast that illustrates the conflicts of the season quite well.

JT has his own separation to navigate. He and Tess are still at odds, but when he hears that Tess may be dating again, he goes to confront her, at Heather’s urging. Austin Basis and Nina Lisandrello once again show great chemistry and skill in the emotion of the moment. As JT asks Tess to please wait for him and not date until he figures out his life, the waitress brings a drink for Tess’ presumed date to the table. The look on JT’s face and the hitch in his voice when he realizes what is going on is heartbreaking and Tess’ face reflects just what we as the audience feel. I sure hope they get their act together soon, because I don’t know how much longer I can take this.

Our Vincat end scene is romantic as always, complete with a silk covered antique bed and hundreds of candles, somewhere in a deep dark dungeon. But all is not OK with the beauty and our beast. They love each other above all else, of course, but they are so far apart in this risky plan, it is scaring Catherine. She makes Vincent promise to communicate and meet in person regularly so as not to fall too deeply into these dark and scary holes they have dug for themselves.

I really don’t know where this can possibly all end , but I have to admit that the preview for the upcoming episode scared me a little. There is a chaotic scene where we hear Vincent’s desperate screams for Cat as they come under heavy assault. Hold me, Beasties, and send me your thoughts below and on Twitter!