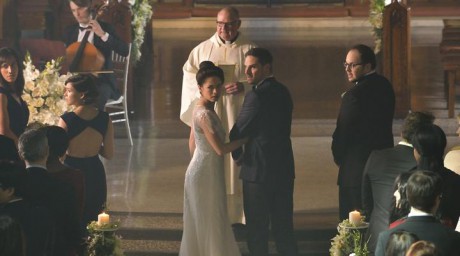 “Who says this has to be our fight?”

All along, Beauty and the Beast has been a story not just about the power of love, but also one of fate, of destiny and purpose. It has been a clash between the pull of “normal” and the push of the fantastical, myth and epic battles against evil. In other words; it is a fairy tale. Not all fairy tales have a happy ending, no matter the “happily ever after” trope; and it sure seems to be a struggle for Vincent and Cat to get theirs.

This push and pull is evident throughout all of Shotgun Wedding, episode 8 of season 3, and once again its title is apt. The gang is trying very hard to make Vincent and Cat’s wedding happen no matter the escalating threat around them, going as far as keeping Catherine in the dark about all the dire developments regarding Julianna and the mysterious Liam. We all know that keeping secrets never ends well and despite good intentions, it backfires in a spectacular way for all concerned.

Each member of the Scooby gang is fighting his or her own battle between the “normal” and the myth. Tess has a new job as Captain that comes with lots of responsibilities, but her loyalties are constantly divided. It is never without good reason that she chooses to break the rules to protect her loved ones; she knows full well what the threat is that is out there and what would happen if it got past her friends. But the Chief of Police doesn’t know about beasts and super humans, and the pressure on Tess is reaching its limits. On top of all this, JT still doesn’t get why Tess has distanced herself from him; which is exactly the problem of course. Tess and JT decide to keep even their breakup from Vincent and Cat, all to try to give them their happy moment. As Tess says, “Maybe we want to believe something good can come out of all this beast superhuman crap.” They all need to believe there is a happy ending in sight and that fate is not just about heartache and death. More than once throughout the episode it comes up that Vincent and Cat’s love is special and meant to be; it stands as a symbol and beacon that this fight is worth it.

Heather, who now finally knows the whole truth about Vincent, Cat and their parents, is barely holding it together. Nicole Gale Anderson has been a delight in providing some much needed lightness and relief to every scene she is in, and once again she doesn’t disappoint. Heather is the perfect lighting rod for the sometimes absurd clash between the mundane and the supernatural, much like when she is quibbling with the florist about orchids in a running gag, all the while trying to keep the super human news from reaching Cat. 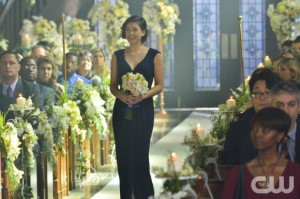 JT probably is not as aware of his own struggle. He still has no idea why Tess is so upset with him and his focus is and always has been, Vincent’s well being. Don’t get me wrong; JT is a hero and he fights as hard as any of them to right the wrongs in their world, but for him all his choices are filtered through his devotion to Vincent. Once he realizes that he doesn’t have to sacrifice his loyalty to Vincent to be able to show his love for Tess we see a big shift in JT and we get one of the sweetest scenes of the series. JT’s gesture is so uniquely his that it can’t possibly be mistaken as anything but genuine and for Tess it comes at exactly the right time. 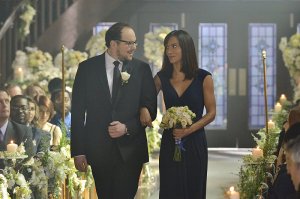 Vincent slowly comes to realize that he can’t hold reality at bay forever, no matter how much he wishes to do so. Ironically, for our heroes, reality involves the fantastical, while their fantasy is all about “normal” life. As Cat walks down the aisle towards Vincent, we are shown reality crashing the wedding in the most spectacular way. Director Stuart Gillard and his team manage to make us feel the threat even before Liam makes one of the best character entrances ever. One by one, the cell phones of all the cops attending the wedding start ringing with an alert and as the camera sweeps over the crowd it cuts to Jason Gedrick as Liam towering over the city on a rooftop as he hones in on Julianna’s location.

I’m very excited about this casting. Jason Gedrick is a seasoned actor (Boomtown, Luck, Dexter, Bosch) with a lot of depth and potential for darkness and his introduction alone is very promising. This Liam is unlike any threat our friends have ever faced before. He cruelly dispatches Julianna and without hesitation throws Catherine across the room. A knife directly to the jugular doesn’t stop him and in fact the wound heals over immediately. Even Vincent doesn’t stand a chance; he is thrown with such force that he crashes through a wall down to the church altar below, where Cat and JT rush to his aid. Vincent is badly wounded and Liam disappears.

This leads us to the biggest role reversal so far. Vincent finds Cat hiding on their rooftop. He feels responsible for everything that went wrong and he finally gets it; the stakes are too high and they have their roles to fulfill. He and Cat have a higher purpose and their personal happiness will have to be sacrificed for the greater good, at least for now. Except Cat is done! She isn’t angry with Vincent as he expects her to be, she is eerily calm. She declares that Liam is not after them personally and why should this be their fight? Why do they have to continually put their happiness and the safety of their loved ones on the back-burner? She is right in a way; their fight will likely never be over and as I’ve asked before, even with all threats eliminated, what does their “normal” look like? Cat has had it and she walks away, leaving a perplexed Vincent standing alone on their special rooftop terrace.

What a great episode once again! I had a few minor issues, mostly with the Julianna storyline, but they were insignificant in the scheme of things. What an emotional, fast paced and well crafted episode. I loved the camera work and editing and as has been the case all season, the acting was top notch. This new super human threat feels real and for once it seems like the odds are against our heroes. What is next for the team? How will Vincent fight without Catherine by his side? How can Liam be stopped? Give me your thoughts, Beasties and weigh in with a comment below.