This week gave us yet another wonderful, old-fashioned MOTW episode, written by Eric Charmelo and Nicole Snyder. As if to illustrate this throwback to the Supernatural of old, the THEN segment included a wonderful collage of classics, including Bloody Mary, In My Time of Dying, Road Kill and even a glimpse of John Winchester as he ascends to heaven at the end of All Hell Breaks Loose part 2.

What makes these MOTW episodes so important to the narrative and overall arc of the show is that they can provide a powerful context to whatever is going on with the Winchester brothers at the time, by providing a subtle mirror to their story. It is important that the parallels are not just carbon copies or substitutes, and this episode hit all the right notes. Charmelo and Snyder managed to keep the story focused on the plight of the Winchesters and avoid all anvils.

The second important function of the MOTW episode is that it allows for some great world building, and this episode scored in that aspect as well. Not only did it honor and add to the well-established canon of Supernatural ghost stories, it managed to place it nicely in a culturally current environment, which supplied some great comedic Dean Winchester moments and also a welcome chance for Sam to show off his smarts. 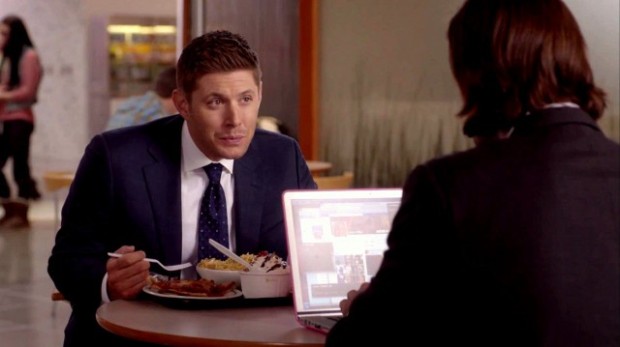 Dean is eager to keep hunting while they wait for Cas to help Sam track down Cain and they find a case concerning the suspicious death of a college student via a haunted pick up truck. As the boys investigate, another student is killed and soon Sam and Dean are trying to find out what connects the gruesome and strange deaths. They first suspect the deceased brother of the first victim and they burn his truck in an attempt to release his ghost. The second victim, however, is strangled to death by the unplugged cord of her computer in her locked dorm room. The Winchesters, posing as FBI agents Grohl and Cobain gain access to the girl’s computer and find mysterious messages repeating the numbers 810. A third student is killed at exactly 8:10 by means of Death Metal, as his wireless speakers turn up to eleven and blow out his windows as well as his eyeballs. Sam and Dean soon find an address in town and a fatal car accident tied to the number 810. It turns out that the group of college friends, distracted by their smart phones caused and fled the scene of the accident that killed a young newlywed some months ago. Those darn kids with their texting and manslaughter!

Only one of the group is still alive, Delilah (Ali Milner), and she is wracked with guilt. As Sam sets out to investigate how the ghost is able to move around and get to his victims, Dean has a moment with the girl. He can relate of course; Dean is filled with regret and he walks a fine line all the time, the very thing that makes him a hero also risks feeding the Mark of Cain. He advises that even though he deals with his guilt mostly through whiskey and denial, he also tries to make things right. He tells Delilah that perhaps the only way she will find peace, is if she atones and asks for forgiveness. Maybe Dean should listen to his own advice!

Meanwhile, Sam cleverly figures out that as we all are made up of electrical impulses and Andrew was killed by electrocution caused by a falling powerline during the crash, his ghost has been able to travel through the wifi connections started at that tower. He warns Dean to get Delilah away from all internet connections and then has his own bonding moment with Andrew’s widow Corey (Barbara Kottmeier, familiar to Supernatural fans as she also guest starred in Wishful Thinking). It turns out that Corey has been talking with her husband’s ghost all this time and even though she knows he is fueled by revenge and suspects he is responsible for the deaths of the students, she couldn’t bring herself to let him go. This is where Sam can relate. He has dealt with turning to darkness for revenge and is now facing his own reluctance to let go. It is really great to get such poignant moments of reflection for both brothers without the heavy handedness we so frequently see.

In the end it is the act of letting go that frees Andrew’s spirit and allows it to leave. Dean tells him to choose either pain or peace but it’s his wife who finally gets through and appeals to him to let go for her, for them. Andrew’s face, disfigured from the accident and twisted in pain and fury, softens at her voice and declaration of love and as his eyes fill with tears, he disappears into some lovely VFX light.

The ending broment in Baby really sums up the story beautifully. Dean tells Sam he wants to stop chasing a cure. He seems to resign to who he is with the Mark and that the answer lies within himself. It is not in his usual self-destructive way and it’s without bravado. His confesses that his peace comes from helping people and fighting the good fight with his brother by his side. He will go down swinging, but he is choosing the peace over the pain.

This all may make it sound like this was a mostly sad and emotional episode and though those moments shone, the whole thing was packaged very nicely in old fashioned Supernatural gore and humor. I have to give a shout out to Ryan Curtis who made his debut as supervisor for the spectacular VFX. The deaths were really outstanding and creative. I really liked how the plunge off a bridge in the opening sequence morphed into the title card and the death by decibels was deliciously gory. Many scenes were full of clever nods to more classic Supernatural moments; Route 666 and Home come to mind. There were also shades of other non-Supernatural horror classics such as Christine, I Know What You Did Last Summer and Final Destination.

The humor came mostly from Jensen Ackles as Dean Winchester. His befuddlement about the ins and outs of social media and whether files get permanently deleted from the internet was not only funny, it nicely served to place the plot and characters in space and time. It was a good juxtaposition and allowed for the parallels to play out nicely. I heard some grumblings about it making Dean look dumb, but in my mind it did no such thing. Dean knows plenty about technology, he built an EMF meter from an old Walkman back in the day and he can fix Baby like no other, but people and their interactions baffle him frequently. I completely believe that he would choose to stay ignorant about social media and many other things concerning the Internet. This bothers me far less than having Dean use a dating app for example. I was also very happy to see Sam react with so much affectionate amusement at Dean’s delight in food and college girls. Sam was in fine form and Jared Padalecki, as always, gave every moment great meaning. This Sam was not only his smart self; he was in charge. I also loved the scene where the boys once again communicated without words and almost in code. All it took was for Dean to text 911 for Sam to brilliantly decide to use technology against the ghost in the machine and defeat him with a very human message over Facetime.

Much of this episode, as did last week’s, reminded me of the Supernatural of old. I must confess that I would happily watch a whole season of these well written and executed installments.

Next week brings back Cain and I am looking forward to seeing Timothy Omundson reprise his role as the formidable character. It is impossible to tell much from the previews but I do hope that he is not reduced to just another villain. The story holds much promise and I hope it will not suffer from what has ailed many of the mytharc episodes, a scattering of focus due to the multi-tiered storylines. These last two episodes prove how effective and layered stories can be when they are kept simple.

Give us your thoughts and predictions below!