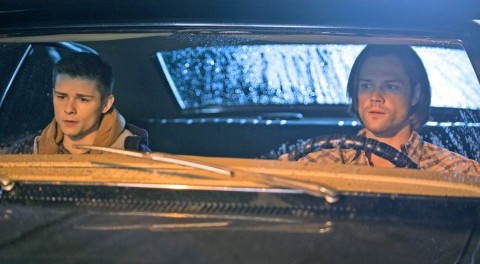 “You pulled a Dean Winchester. Thank you.”

In the past, accusing his brother of “pulling a Dean Winchester” has been Sam’s way of telling him to stop being self-destructive, to stop thinking he’s less worthy of being a priority and it’s never usually said with affection. Historically the younger Winchester has been infuriated with his brother for this tendency and it has caused angst between them. In this week’s episode, the Adam Glass penned “About A Boy”, Sam thanks Dean for the choice, stating that, while the younger version of his brother didn’t have the Mark of Cain, he wanted the Dean he knew back. This feels like a huge step to me. It has always been Dean who has said “screw what’s the right thing to do, this is what I want” when it comes to decisions about their family and always Sam who has railed against him. This change in attitude seems to be indicative of who Season 10 Sam is, someone who is finally willing to put all things aside to help his brother, a man who, after 30+ years is at peace with his place in the hunting life.

With another serving of a “monster of the week” the teaser shows us a drunk, JP, being thrown out of a bar and followed to his car by a large shadowy figure. As he wrestles with his car keys [side note – it’s a recurring theme I’ve noticed on Supernatural that incidental characters who attempt to drive while falling-down drunk tend to come to a grisly end] he is attacked from behind and disappears in a white light, witnessed by a homeless man who gazes towards the heavens.

In the bunker we see Dean obsessively researching anything he can about the Mark of Cain. As he sits on the floor by his bed, a pose familiar to those of us who watched a PTSD-ravaged Dean after his return from Purgatory, he appears to have noticed a possible clue right as Sam comes in and tells him he’s caught a case, the missing people. Sam convinces a reluctant Dean that he needs to get out of the bunker, to forgive himself for how badly he had beaten Charlie. Sam needs to help his brother realize that together they will beat the Mark of Cain. Dean is once again willing to admit his fears and doubts to his brother and this is what has been missing between the Winchesters for many years, their willingness to reveal weakness to each other 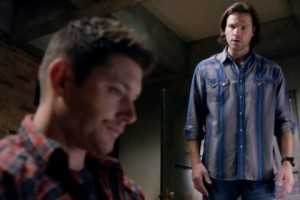 Once they arrive in Pendleton, Oregon and interview the witness they are quick to dismiss his theory of alien abduction, although Dean confesses to prefer the prospect of “little green dudes” to the possibility that this was the work of either fairies or angels. When Sam suggests they split up to question locals and points Dean in the direction of the bar, Dean’s reluctance to be exposed to one of his addictions is apparent and Sam reconsiders, quickly telling his brother they can stick together if he’d rather. Dean refuses as he recognizes his need to face his demons, so to speak, and as he questions the bartender he takes a shot of whiskey. He grips his arm as the Mark apparently begins to bother him, maybe his new addiction being fueled by his addiction of old. Sitting next to him at the bar is Tina, a fellow alcoholic who knew the missing man and offers some information and conversation. Over drinks they find common ground in their less than clean living but she leaves, stating with a wry grin she needs to “before you fall in love with me.” I enjoyed the non-sexual nature of their encounter; Sam has never been able to relate to Dean’s need for alcohol and it seems Dean found a kindred spirit for a while in Tina. I also felt their platonic bond was more appropriate as the episode progressed and their characters became children.

Dean notices Tina being followed out of the bar and goes to investigate, only to hear her scream and see a blinding light and a pile of her clothes. Just as he turns and notices he’s not alone we cut to a close up of his eyes as he frantically explores the small cell where he’s being held. Wiping a hand over the dusty mirror we see a young Dean (Dylan Everett) exclaim “son of a bitch!” A young Tina (Madeleine Arthur) is being held in the cell next to him along with a terrified teenager, the missing drunk, JP who is promptly dragged off screaming by the huge man who took them. Dean manages to open a window just as the man returns and Tina distracts their kidnapper long enough for Dean to get away, leading to one of the funniest meetings between the Winchesters in a long time. As Sam opens the motel door to his brother his face drops and he can do nothing but stare as Teen!Dean grabs his belongings and prepares to rush back to rescue Tina. Jared Padalecki’s subtle comedic skills come into play here as each tiny change to facial expression makes the scene even more hilarious as Dean explains “I’ve got no grass on the infield and a girl’s gonna die”. 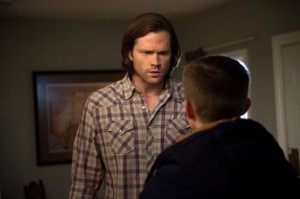 In the car Sam is even more disturbed not only by Dean’s vivid descriptions of his body’s reaction to once again going through puberty but also to his confession that he was more than a little turned on when he heard a Taylor Swift song! Eventually Sam gets his head in the game enough to tell Dean that he’s realized they are dealing with a witch and that they can kill her to reverse the spell. Here Dean admits that when he was reverted to a teenager the Mark of Cain disappeared. They now have to choose: reverse the spell and have Dean once more affected by the Mark or leave Dean as a teenager. Dean is for staying young, choosing being a teen over going back to being a “psycho-rage-monster-slash-borderline-demon”, once again touching on the theme of the season, being a monster. Sam, however, doesn’t agree and needs to find a way to get his brother back.

Once inside the witch’s house Sam and Dean manage to talk to the kidnapper who tells of how he’s been with the witch for centuries, made to do terrible things including eating his sister’s heart. It turns out he’s Hansel, of Hansel and Gretel fame. He wants their help to escape her clutches and in return he’ll allow them to use the hex bag he’s wearing to return Dean to his proper age, something Sam is getting more desperate to do as Dean appears to be more reluctant.

Meanwhile the witch, played in a very camp manner by Downton Abbey’s Lesley Nicol, is upstairs telling Tina exactly how she’ll be consumed, when Sam, Dean and Hansel enter. She is amused by their alliance with her assistant and tells them she did not make Hansel do anything, revealing he was a willing participant in all of the atrocities he committed. He turns on them, as I saw coming to be honest, and a fight ensues where the witch killing Molotov they handily carry in their arsenal is destroyed and they are once again captured.

With a cleverly placed cuckoo clock chiming in the background the witch explains how she has to turn adults into children these days as children are too readily missed and the searches for them too comprehensive. While Dean distracts her with patented sarcastic comments Sam manages to reach the butterfly knife in his pocket just as the witch admits to being asked by the Grand Coven to “take care of” Rowena. Once again with the upper hand the Winchesters attack but are both quickly overpowered, Sam by the witch and Dean by Hansel. When the witch asks her assistant to turn Sam so she can throw him in the oven the man realizes his hex bag is gone; Dean has grabbed it and turns himself back in order to save his brother. He stabs Hansel and in a parallel with the original fairy tale, shoves the witch into the oven, his face reflecting the by now familiar psychosis the Mark generates. 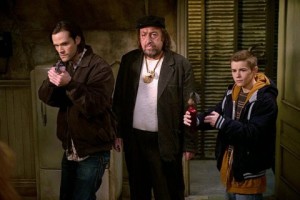 The Winchesters have to break the news to Tina that the hex bag that could turn her back was destroyed in the fight and offer to work to find a spell to help her. She decides to decline their offer, relishing the prospect of a second chance, a fresh start, something Dean seems to regret not being given. As they send her safely on her way, a bus to Salem behind them, Dean shows Sam his Mark. Sam tells his brother that he wishes the Mark is gone but he wanted him back and he’s going to take the win because Dean didn’t hulk out. As Sam tells Dean they’ll figure it out because they always do, Dean tells him “damn right” with a lot more conviction than we’ve seen in a while. They drive off into the sunset to the strains of Taylor Swift’s “Shake It Off”, Sam’s face one of pure terror!

With the recently announced republishing of an uncut version of Grimm’s fairy tales I felt this episode showed a lot of the violence that the original stories were famous for. It seemed a slightly odd choice for a monster of the week but tying the plot in with the Rowena storyline worked and allowed Sam and Dean to recognize that Rowena’s appearance has many more layers to it than previously thought. I enjoyed the humor of the story and Serge Ladouceur‘s talent as the show’s director of photography shone through in his directing of this episode making the whole thing very visually pleasing.

Dylan Everett‘s portrayal of young Dean is outstanding on a number of levels. The actor studied Jensen Ackles‘ performances at length before tackling the role of the Winchester in Season 9’s episode Bad Boys. His mannerisms and inflections were spot on even then but what makes this week’s performance even more impressive is that he made it believable we were watching 35 year old Dean Winchester in a 14 year old’s body. I didn’t feel like I’d watched an episode light on Jensen Ackles even though he only actually appeared in the first few minutes and then again right at the end. The entire experience was enhanced by the way Jared Padalecki responded to the actor he was playing opposite, easily slipping into the witty banter and chemistry he enjoys with Ackles, much like in Season 7’s The Curious Case of Dean Winchester when the late great Chad Everett entertained us with an 80 year old version of Dean. All-in-all, great character writing, meticulous preparation by the actors and Ackles‘ 10 years of developing the many layers of Dean Winchester combined for a delightful episode which frankly left me wanting to see more of Young Dean!

As always, we’d love to hear what you thought this week!