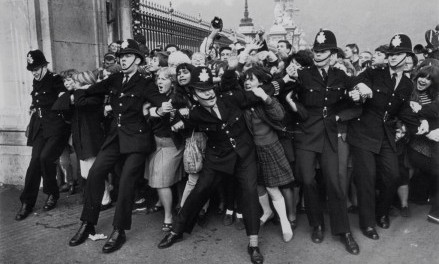 I originally published this a year ago and as I start to prepare myself for a jam-packed weekend at VanCon 2014 surrounded by friends I feel compelled to once again share my thoughts on just what it means to belong to a fandom.

Four years ago, fuelled by an illness and a desire to have something to look forward to, I made a decision that took me on a new and surprisingly life-altering path: I booked tickets to go to one day of the Supernatural fan convention in my home town of Vancouver.

The idea of attending such an event had never appealed to me. Because of a possibly unfair portrayal in the media, I pictured conventions to be an overwhelmingly busy schedule at a venue that was taken over by obsessed fans dressed in costumes who are unable talk about anything else. While this may considered by some to be an exaggerated view, that is precisely what I found at my first “con” experience; and it was amazing!

Before I continue, I must insert a quick disclaimer. I have only attended Supernatural conventions. I did attend Fan Expo this year in Vancouver which was also a fascinating and exciting weekend, but Expos are very different experiences with the focus being on a sweeping view of genre TV and film as well as merchandise. I can only offer an opinion based on one show’s convention and I wouldn’t want to assume fans of other TV shows have the same experiences. What I can do is recognize that being in a room full of hundreds, possibly thousands, of people with whom you know you have at least one thing in common gives a sense of camaraderie and belonging that is exceptional in its uniqueness.

To attempt to ease myself into a con experience I chose to only attend the Sunday of Creation Entertainment’s 2011 Vancouver Supernatural convention, known in the fandom as “J2 Day” as it’s the day the show’s stars, Jared Padalecki and Jensen Ackles, attend. The buzz of the crowd, the feeling I was amongst family when talking with other con-goers in line, as well as the awesome experience of seeing actors and directors talk about their craft made for such a wonderful, albeit long, day that I decided the following year I would attend the entire weekend. 2012’s “VanCon” was an even greater experience and this past weekend, the 2013 VanCon convinced me that as long as Creation Entertainment offers it, I will attend.

A fandom is a strange thing to be a part of. There’s a certain stigma attached to someone who is a fan of a show that initially makes one reluctant to discuss it. I came to Supernatural late, buying the 1st season on DVD in 2010 while its 5th season was airing, but I soon knew that it would be a big part of my life. It sounds melodramatic and I never thought I would have such a strong opinion of a TV show, but something about the other people I discovered on Twitter who were watching along with me made me realize that I had become the part of a “family” and I should be proud to talk about that. Social media has definitely played a large role in the connections I’ve made and my interactions range from casual acquaintances with whom I can discuss the intense storylines to discovering people with whom I have much more in common and who will be life-long friends. My involvement with this magazine and the incredibly exciting things that have come with that would not exist if I had not found the Supernatural community, or SPN Family, on Twitter.

Between panels and photo ops this past weekend I had a chance to chat with Mitch Kosterman. His brother, Clif, has been a bodyguard for over 20 years, working for such stars as Sharon Stone and Kurt Russell, and the last few years of his career have been with Supernatural. Mitch told me how Clif has observed how interesting the fandom is. “He asked questions. He got involved in social media and started a campaign where he solicited people to send e-mails about what the fandom meant to them. They sent in great stories and photos of their tattoos and the Impalas that they built from scratch. They had shrines built in their houses!” Clif heard stories about how the show had brought their family together or how it had helped them through an illness. Several people spoke of how watching the heroes overcome their difficulties helped them through a depression and even saved them from suicide.

“He started having interactions with the fans, speaking at conventions himself. He even visited some of these people in their homes, met with them, had dinner with them. He shot some video because he thought we should make a movie out of it.” After a little while, Clif enlisted Mitch’s help with the video and audio in order to capture HD quality film and make it into a documentary.

When I asked Mitch how he felt the Supernatural fandom was unique he tapped into his years in the industry to make some comparisons. “I’ve witnessed it since back in the X-Files days. In the early days of the internet there were sites that had bulletin boards where people could contact each other, so fan bases were forming out of that. I know for a fact that social media plays a huge role in how these things happen. I understand that Supernatural has been going on for a while, but I still think this is a remarkably large fan base, a powerful fan base.”

Mitch Kosterman has worked on about 120 different film and television projects but he feels that the actors on Supernatural and the CW Network have allowed a level of access to the fans that doesn’t happen on any other show. “In fact, you’ve seen other shows try to take that lead, people are starting to leverage that, but I think Supernatural started that way sooner.”

The experiences at a convention are a physical manifestation of what social media offers, affording fans the opportunity to give real hugs instead of virtual ones, to have discussions about the show that aren’t limited to 140 characters and to finally match names to faces that are ordinarily hidden behind an avatar!

The word “fandom” has a wide-reaching definition. It encompasses the fans of anything from sports teams to actors to TV shows. Being passionate is not something that should be hidden and my own, relatively recent, experience with being a part of a global fandom has been nothing but positive. As more shows and movies offer their fans the opportunity to be involved at a very personal level with conventions there is a growing understanding that not only does the community gain a greater understanding of the show from the many panels and fan interactions at these busy events, but the people involved with the show also get to appreciate what the fans, themselves, can give back in return. So whether it’s Supernatural, Justin Timberlake, Harry Potter or the Green Bay Packers, embrace the fandom you belong to; who knows what opportunities will be waiting around the corner!

Copyright © 2020 Create a free website or blog at WordPress.com.