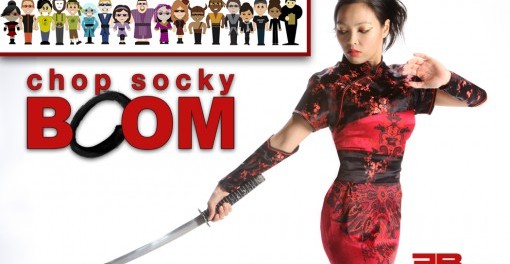 I was fortunate enough recently to attend a screening in Seattle of the web series Chop Socky Boom. A tongue-in-cheek, self-deprecating look behind the curtain of independent film-making, Chop Socky Boom tells the story of struggling Seattle actors as they audition for and film “Final Zodiac Warrior”, a kung-fu web series. I chatted with creator Darlene Sellers and producer Heath Ward about their hilarious show as well as the expanding web community as a whole.

At Stake Magazine: Can you talk a little bit about the conception of Chop Socky Boom, where the idea came from.

Darlene Sellers: Heath and I have actually known each other quite a while. He was doing more of the film-making things like writing and directing and I was always doing more of the acting side of things. Frequently I would come to him with these stories about different things that had happened at auditions or that I had seen on set and he had some pretty good stories too from his side of things. It just struck us that it would be fun to celebrate the tenacity of the independent film-maker.

Heath Ward: We have some serious fun with it and take some of the absurd adventures that we had been on and kind of flip them on their head a little bit.

ASM: So some of this was from real life then?

DS: It’s been kind of fun because people will come back to us, in particular directors, and say, “Oh my gosh is that me?” And we say, “Well actually, no, but interesting that you saw that!” What we’ve been seeing is because of the odds that the independent film-makers are up against they rarely have enough time or money and people end up going to some extremes to get their work done. A lot of the things that we highlight and illustrate are quite common. In one episode [director] Trick says, “We’ll fix it in post” and we’ve all been on sets where even though everyone wishes it could be handled right there in principal photography the decision gets made to try and fix something in post. So we found several universal truths as we were continuing on. And we’ve had a number of the crew and the cast come to us and say, “Oh my gosh this just happened on this set”.

HW: Between Darlene and I there’s almost thirty years of independent film experience so there’s a wealth of stuff to draw on.

DS: And it’s kind of fun now because occasionally we’ll have someone come up to us and say, “I had the worst day on set and all I could think was at least it’ll make a good episode!” We’re pleased to be able to provide that outlet for our team!

ASM: What prompted your decision to distribute as a web series?

DS: There were a variety of reasons. First and foremost we wanted to be able to tell the story we wanted to tell with the cast that we wanted to hire. A web series really seemed to be a great avenue to tell a story that maybe hadn’t been told before and with the characters that were the best fit. There was one brief interaction we had with a potential producer early on who said, “I love the concept but we’re just going to have to replace half the cast, because nobody wants to see this character and this character, it’s not what your traditional TV audience wants to see.” So we said, “Well let’s stop you right there because that’s the whole point.” As a web series we can use the actors that we want to use and keep the characters. So part of it was just the freedom to be able to tell the story we wanted to tell. Another piece to it was that Heath and I have both worked on a number of short films, features and music videos and yes, you get to tell your story, follow your vision beginning, middle and end to completion and you get to put it up. The audience gets to see it when it’s completely done. That’s great, there’s a lot of stories that that’s how you want to tell them. But because our story was celebrating independent film-making we saw a potential where it could be a bit more interactive. We thought a web series was a great way to put the story out, see what people think and then make some changes and keep going. So we really wanted to be able to interact with the audience like that. And then the third reason, which is the reality that a lot of film-makers face, is just dollars. A web series allowed us to put out as many episodes as we could afford at the time and then if there was interest we could raise money and make some more.

ASM: You mentioned your amazing, very talented cast – Khanh Doan won best actress at the LA Web Fest which must have made you very proud – what was your casting process? Did you have existing relationships with a lot of the cast?

DS: Yes, 100%. We actually had a few actors in town beg us to hold auditions because there’s a few folks that would really like to audition for the show, but up to this point, Heath and I are very fortunate to have worked with so many talented people that we pretty much already knew who we wanted to use when writing the different characters.

HW: Darlene came in with a binder full of headshots of various individuals that she had known over the last fifteen or twenty years and we pretty much picked and chose as we went. There was never a single audition.

ASM: Web festivals are becoming increasingly popular and you’ve had a great presence in North America and internationally. How have you found the experience of attending them?

HW: Darlene’s had an opportunity to attend a lot more of them than I have but what we’ve talked about is the increase in the quality of them in such short space of time. From the quality of the work and the organizers of the festivals, everything is just amplifying so fast and it’s really exciting to see that. Being at the Vancouver Web Festival the energy everyone has and how positive it is and how much of a community it is, it’s really exciting. I think web series has quite a future and it’s very exciting to see that unfolding and developing right in front of us with all these festivals.

DS: Another thing to be said about the festivals is that the festivals are doing a bang up job and the shows, like Heath says, are extraordinary and getting better. The show creators themselves though are one of the things I enjoy most about the festivals and I think most folks have figured out that we’re not in competition with one another in the least. Basically we’re all working to introduce the general viewing population to being able to watch stories on the web. If I watch your show it doesn’t mean I don’t have five more minutes to watch somebody else’s show. In fact if I watch your show and I enjoy it I’m more inclined to click on a link to another show. There really is a collaborative spirit and it’s been interesting to me at some of these festivals because folks will go up to a show runner and say, “Love your show, appreciate this, have you thought about this, this, this…” They’re not talking about story changes or how they filmed it, they’re talking about how to grow somebody’s audience. It’s very exciting in that way, just how supportive the entire community is.

ASM: You’ve just announced a partnership with Frostbite Pictures. Can you talk a little about that?

DS: I think it’s fair to say we are so impressed with the quality of work that Frostbite does and we really appreciate how supportive they are of other shows and web festivals in general. We are looking forward to collaborating with them.

ASM: Each of you wear a lot of different hats on the show. How difficult did you find it to juggle all the roles?

HW: Well first off on independent film you’re always wearing a lot of different hats so I think there’s always a lot of ups and downs in juggling the multiple positions. I think as we’ve gone through these various episodes we’ve found that we’ve gotten better at juggling those! I think we’ve also discovered the roles that we will never try and juggle again! Darlene is the primary writer, creator, co-director and co-star and on the first four episodes she was craft services as well! As we went along we thought no, we need to get some more resources and get someone to take care of craft services so that the director’s not disappearing to suddenly take care of Red Vines! We definitely in some ways push the limit of the multiple hat-wearing positions, but it’s always worked out so well because of the people we work with, the quality, the talent and the dedication is so top notch. Everybody is pretty much friends with everyone else on the show.

DS: I think pre-production and post-production where Heath and I are wearing a lot of hats is a lot of work but it’s doable. We make sure we set our own timeline to do it. It’s principal photography where it can get a little tricky sometimes because we are trying so many different roles. And it works because Heath is so fricking talented he does successfully juggle things that most people wouldn’t be able to juggle.

ASM: The first four episodes of Chop Socky Boom are up on your website and I’ve been lucky enough to also see the next four episodes. What are we looking at for the future of the Zodiac Warriors?

DS: So much! There’s sixty episodes that we have planned out, five seasons, twelve episodes each was the original plan. There’s quite a bit of room for where the story can go and we do have a five season arc in mind. That will mostly come down to available resources. We’re hopeful and Frostbite has been very supportive and said that they are also hopeful that we will be able to find the resources to continue with more episodes. We don’t know yet when or how that will work.

ASM: With it being a show about a show you’ve got infinite stories to tell.

HW: Yes. And Darlene is a phenomenal creator when it comes to this show. She has so many layers to each character as far as back-story and where they’re going and what’s going to happen. I have to check in with her any time we’re doing a scene and just say, “Wait, what’s the back story on such-and-such three years ago when they were doing this?” She has it all.

ASM: Any final words for the people involved in the show?

DS: We are so thankful for our entire cast and crew. There would be no show without their tremendous generosity. Also our Kickstarter backers.

Thanks to Darlene and Heath for taking the time to talk with me. I’m excited for them to be able to showcase more of this fantastic comedy. I encourage everyone to check out the episodes online – I guarantee they will leave you wanting more!