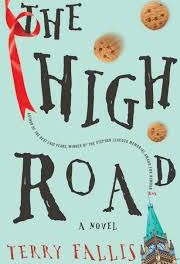 In my recent review of The Best Laid Plans by Terry Fallis, I mentioned that I was excited to learn that there was a sequel and that I had just started reading it. I am happy to say that the sequel, The High Road, more than lived up to its predecessor!

Starting immediately after The Best Laid Plans ends, Angus McLintock and Daniel Addison are faced with a decision – do they follow up their amazing victory and hand in forcing a general election, or do they accept that their time in the limelight is done and go back to teaching at the university, a plan both had once the local election was over. As is made clear in The Best Laid Plans Daniel had every intention of continuing his career in teaching after becoming disillusioned with the world of politics. Angus had never wanted the postion at all, only taking on the election because he thought there was no chance of winning.

During the course of the initial campaign Angus came to see that this new venture was helping him to work through the grief of recently losing his wife. Daniel’s cynicism of the political world was turned upside down by the brutal honesty of his candidate and by the end of the first book, both were thinking of continuing but neither said anything thinking that the other was done.

This theme begins The High Road and is very quickly resolved. Within the first couple of chapters Angus has announced his intention to run again provided that Daniel works as his Executive Assistant. With the blessing of the University, who are more than happy to hold their postions open until their run with candidacy is done, Angus announces that he will run again for the district of Cumberland-Prescott in the upcoming general election. To combat Angus’ candidacy the Conservatives run Emerson Fox, known as Flamethrower Fox because of his penchant for negative campaigning.

Despite all of the negative publicity being thrown at the McLintock campaign Angus refuses to stoop to the same level, citing his success in the previous election coming from his honesty to his constituents. Even when face to face with it at the candidate debate Angus manages to reign in his Scottish temper and takes The High Road. That, along with the Conservative vote being split by one of it’s members running as an Independent because of their dislike for Fox’s campaign strategy, leads to another surprising win for Angus and Daniel.

I was surprised that the election only took up the first half of the book, expecting it to be another tale of an election run. Whilst this would still have been enjoyable I am glad that Terry Fallis did not take this route as it would, in my opinion, have been taking the easy route of writing another version of The Best Laid Plans.

The second half of the book revolves around Angus’ first duties as a duly elected Member of Parliament. With the Liberal Party winning in the general election Angus had helped bring about he is tasked by the new Prime Minister to investigate the reasons behind the collapse of the Alexandra Bridge which occurred on the night of the election. Never one to do things by halves Angus throws himself into the investigation, delving further and further in to the depths of Canadian infrastructure. His findings show that there is a desperate need to include money for infrastructure in the new budget or the country’s deficit, thought to be hidden but actually just redistributed, will spiral out of control. This goes against everything that the Prime Minister promised in the Liberal Campaign and yet he is open to listening to the facts. Unfortunately, the Minister of Finance who will actually present the budget is not so accommodating and Angus and Daniel must work under the radar to prove Angus’ findings.

Having to deal with a visit from the President of the United States, which is hilariously written, is only one of the obstacles that Angus and Daniel must overcome on their road to influence the budget. I don’t like to spoil books for those who haven’t read them and I don’t believe that anyone who starts this book will be able to put it down before finishing it so I am going to leave you to discover how it ends.

As with The Best Laid Plans I found myself immersed in this book, enjoying a return to the characters I fell in love with and, despite myself, getting caught up in the political situation. With the second part of the book dealing with Canadian infrastructure (bridges, roads, canals, ports) I could see that, whilst this is a work of fiction, the points it raises are very relevant. Angus makes the point that whilst it might cost a little money, relatively speaking, on a country-wide level to maintain such things as bridges and roads on a yearly schedule it is so much more expensive to fix those once they are get almost beyond repair. I am not immune to complaining about the amount of construction on our highways in BC that seem never-ending but the fact that the construction is constantly moving makes me think that maybe it is better to have a little construction all the time to keep the roads in repair than to have that road closed completely due to severe damage.

Once again in The High Road Angus is writing letters to his dead wife which are detailed at the end of each chapter. Reading these was a window in to the soul of a man grieving, particularly the entry written on their anniversary. In spite of this they were very hopeful. Having this new opportunity in a field that had never involved his wife gave Angus an outlet that allowed him to enjoy himself. Being alright with not being sad is one of the hardest things that I found in the grieving process and Terry Fallis does a wonderful job of portraying this as Angus gradually accepts that his life will go on even if his wife is gone. There is a beautiful line towards the end of the book that Angus says to Daniel – “I’m still doing my fair share of grievin’, every day. It may be that I’m left walkin’ with a limp, but I’ll still get around. Some days are worse than others but I’ll still get where I’m goin’.” This line really resonated with me and I think it will with anyone who has gone through a loss, whatever that loss may be. It will never go away and will always be part of you, but it doesn’t have to define you.

I would heartily recommend The High Road to anybody, although you should read The Best Laid Plans first so that you can understand the characters fully. The High Road made me feel so much for the characters and at the same time, I don’t think a smile left my face while I was reading it; I was very sad when I finished as I could have keep reading about Angus and Daniel for a very long time.

Copyright © 2021 Create a free website or blog at WordPress.com.