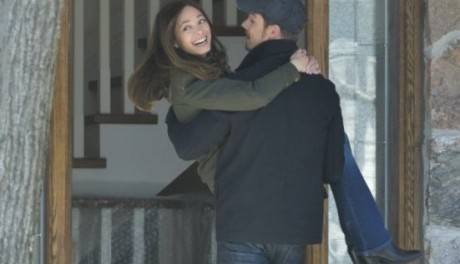 With that statement, Tess not only encourages JT to step out of Vincent’s shadow, but she also sets the tone for episode 20; Ever After. Our heroes get to explore who they really are, all while trying to be someone they are not.

When the episode starts, Vincent and Cat learn that the witness Jack Watson (Michael Rhoades), who was to help them put Gabe away, has ended up missing. When they investigate the safe house where Watson had been hidden, Vincent soon discovers that his last hope for exoneration has died at Gabe’s hands. Since their only option now is to find where the DA turned murderer has disposed of the body, Vincent tracks Gabe through the city. Of course our beastly fugitive still hasn’t quite mastered the principles of disguise wearing, so he is soon recognized and almost caught. Their friend at the FBI, Agent Henry Knox (Anthony Ruivivar), who would like to help set the record straight and clear our hero, is none too pleased about Vincent attracting all this attention and he suggests hiding our friends in witness protection. He moves Vincent and Cat to suburbia and JT and Tess promise to pick up the trail and find the missing witness.

Cat has the most trouble adapting to this pretend normal life, while Vincent happily putters around in a bathrobe ready to bask in the peace of anonymity. You can’t take the city or the cop out of the girl, of course, and Cat’s true nature soon pops up when their neighbor ends up accidentally shot by local Sheriff Deputy Lewis, played smoothly by the always welcome Gil McKinney. Vincent balks (out loud, to the resident gold fish) at this risky attention getting behavior by Cat, but he soon realizes that neither of them can just put their heads in the sand when justice is at stake. Vincent tracks Cat and is able to arrive just in time to help her dispatch the murderous deputy who, very predictably I must add, turns out to have been in on it all along with the victim’s adulterous scheming wife. If it wasn’t for those pesky kids…!

Meanwhile, JT and Tess are having some trouble tracking Gabe, until Tess reminds JT of just how smart he is and that he doesn’t need to try to be Vincent to shine. Being himself is more than enough and JT brilliantly is able to figure out, with the help of cell phone towers and GPS, that Gabe likely brought his victim’s remains to the secret beast dungeon for disposal. Once there, our favorite pair is ambushed by an ever crazier Gabe, once again out on bail. It’s quite the standoff and while JT angrily confronts the self righteous former DA, Gabe seems even more convinced than ever that he is “doing the right thing” and that he is the only one up to the task of disposing of Vincent and protecting Cat. Bad guys never think they are in the wrong of course, but Gabe is really showing his true colors here; he is willing to go to murderous ends just to prove himself justified. This is not new behavior for Mr. Lowan; but until recently, it had mostly been hidden by a layer of professional respectability and the trusting affections of a good woman. When Gabe threatens to expose the whole secret beastly mess and our friends along with it; JT and Tess reluctantly have to let him go. Of course, JT blames himself for failing to come through for his best friend and it takes Tess and some gummy worms to show him that his smarts and bravery make him anything but a failure; Batman has nothing on BAMF!JT. He doesn’t have to pretend to be someone he is not to be a hero.

Vincent and Cat head back to New York, their cover blown and their time as a “normal”, suburban couple over. Vincent realizes that asking Cat not to be a kick ass cop, who fights what she believes in, is like her asking him not to be a beast; pretty much impossible. These two cannot deny their essence, their nature, anymore than they can deny their love for each other. This after all, is the woman Vincent fell in love with, just as Catherine fell in love with a beast. THAT is their “normal”.

This episode had plenty to enjoy. Cat’s discomfort with the niceties of suburban life was pretty funny. JT and Tess had some lovely moments and I enjoy seeing their relationship grow. I also have to confess I am always very happy to see Gil McKinney, even if he plays a bad guy in an unflattering hat.

From the preview it looks like things are heating up even more as the season comes to an end. Vincent appears to have turned himself in and Gabe threatens that he will be dissected into little pieces. We have to trust that the fearless foursome will find a way out of this predicament, since we already know we are getting another season, but the situation sure seems dire.

Let us know what you loved and didn’t love about this episode Beasties! Leave a comment below.